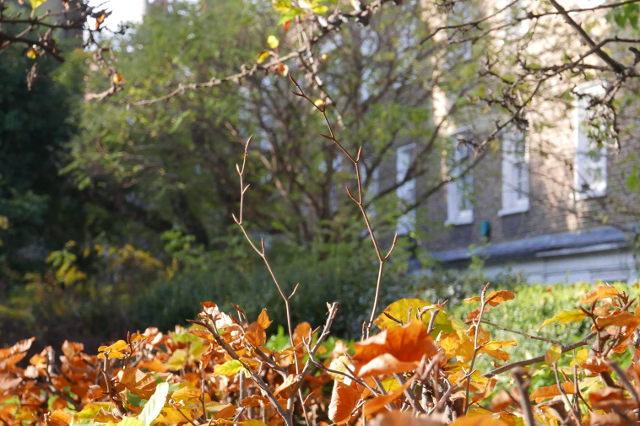 A newly planted beech tree grows out of the existing hedge at Crabtree Fields.

The Friends group have planted ten beech trees at Crabtree Fields public open space, to restore the hedge that surrounds the eastern border of the park. The beech saplings, which are about five years old, were all planted by volunteers in November. They were bought from a nursery in Kent and paid for by a local, anonymous donor.

Over the years the beech hedge has been a distinctive characteristic of the much loved little park. But some of the beech trees that make up the original hedge have died. The prolonged drought in 2018 meant several trees had to be removed leaving gaps in the hedge.

Common beech (Fagus sylvatica) is native to southern England and makes a good hedging plant. “If clipped it doesn’t shed its leaves, and creates a year-round dense screen, which provides a great habitat for garden birds,” says the Woodland Trust.

Dead wood and fallen leaves are not thrown away. Instead the Friends group have created dead wood areas and leaf piles in out-of-the-way parts of the park to encourage insects and food for wildlife. We don’t use leaf blowers but sweep or rake the leaves into piles.

This entry was posted in Crabtree Fields, News and tagged beech, London, parks, wildlife. Bookmark the permalink.
%d bloggers like this: